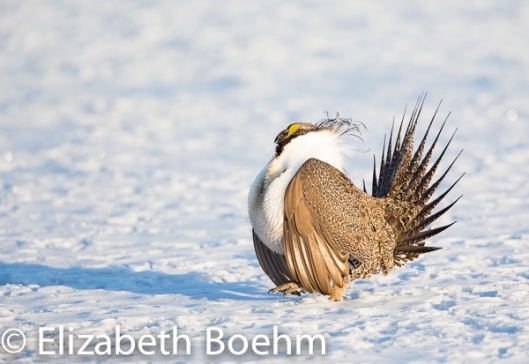 The calendar tells me spring has been going on for 6 weeks now.  If you talk to a fellow Wyomingite, they may tell you spring does not arrive until June.  If you watch the weather, you may decide spring does not arrive until June.  If you pay attention to the birds, they will tell you spring arrived sometime in early March.  I really enjoy this time of year with all of it’s frustrating weather that can put a damper on being outside and setting up a camera. This morning, May 7, it is snowing quite well outside and it is predicted to turn to rain as the day warms up.  I, of course, am hoping for a little break in the clouds in which a bit of sunshine will shine on this fresh frosting of snow.

I like to start spring with the Greater Sage Grouse strutting on their lek.  I was hindered slightly with the deep snowpack this year but I did get a chance to watch and photograph these birds on a number of mornings as they performed their annual mating dance and the antics that go with this ritual: chasing, fighting for dominance, indifferent hens, etc.  The snowpack was difficult at times but I came away with clean images without a lot of clutter in the background.  I did discover, the birds do not like strutting

in a 10″ layer  of fresh snow.  I was disappointed on this particular morning, as the sun rose beautifully and the light was incredible.  All was in place for good photos except: I had no birds.  They made an attempt but then decided to go about their other daily business leaving this photographer to head home.

During this same time period I had been watching several nesting Great Horned Owls. I was determined to capture an image of a particular nest with an owlet sitting on the lip of the cavity. I have been working on this image for a number of years; my timing has always been wrong. This year I discovered the young owls were about a month ahead of where I thought they would be. I rearranged my schedule for fear of the two, young owlets fledging the nest any day. Despite the weather (the weatherman forecasted wind and cold temps), I arrived early to the site in hopes of getting a morning break from the wind. No luck! The weatherman was correct, windy and cold. I dressed warm and arrived just before sunrise. The owlets had not fledged but they were napping, I waited them out. I briefly stepped away to warm up during a large, cloud- covered moment.  When I returned, there sat a brazen, young owl on the lip of the cavity. Just what I had hoped for! I took a few distant insurance shots and then slowly moved into position. It could not have been any cuter! A photographer’s high was happening! 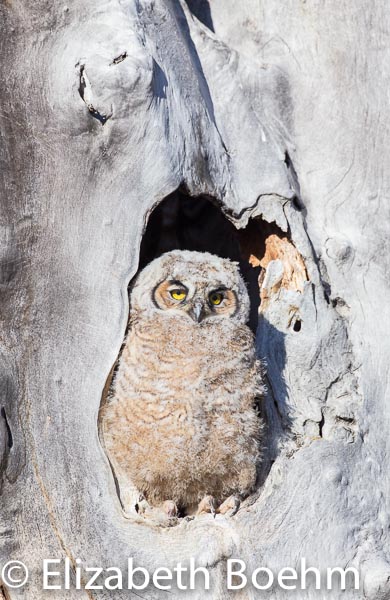 Spring continues on with crazy weather but it does not stop the birds.  When they decide it is time to nest, they nest. A week later, I had a morning in which the spring weather was great; calm, warm, and sunny. I took a drive to go birding and scout a number of nest sites which included a Mountain Bluebird cavity. The Mountain Bluebird pair had returned and were nest building.  The male was present but the female was returning time after time with a beak full of grass or feathers. She was diligent with her task, filling the cavity with nesting materials. I did not stay long for fear of disrupting their nest building. I look forward to their eggs hatching and photographing the constant feeding routine of both parents.

It is an exciting time of year with migration in full swing in Wyoming. I am seeing FOY (First of Year) birds almost every day, such as the lovely Lark Sparrow that did not mind a photographer coming in close for a photo. I do my best to not let the cold and wet weather keep me inside as you just have to “Get out and go for it” or you may be stuck inside for days. I was told by a wise photographer years ago that there was only one guarantee in this business: You won’t get any photos if you don’t get out and take them!  It is so true!