I recently spent a night camping on Antelope Island in the Great Salt Lake of Utah. The weather had been hovering around 70 degrees which was warm by March standards. It was very pleasant.  I had high hopes of catching a few Chukars courting in the rocks.  They did not fail me and were quite the posers! This is a colorful non-native bird like the Ring-necked Pheasant. As with most members of the Phasianidae Family (Upland Game Birds) they put on quite the display for courting. Standing on top of a high perch, typically a rock in this area, they would cackle and then perform a crowing call for the females.  One could tell if a female was close as the crowing and cackling would become much more intense especially if there were two males vying for her attention.  The male would come down off of the rock and follow the female, moving very quickly, and then finding another display perch.  It was hard to predict where they would move to as Chukars can move quickly on the ground. It is an awesome photo event!

Along with the Chukars there were a number of birds visible on the island with numerous spring migrants having returned and in the process of claiming their territories. One of which was the Western Meadowlark, very prevalent along the roadways. This bird has always been elusive to my camera; flying away with just the thought of picking up the camera for a photo.

I was fortunate to grab a few shots using my vehicle as a blind. The birds were singing on a variety of perches consisting of bushes, rocks, and signposts. Obviously used to a fair amount of traffic they were not nearly as wary of my camera as I had expected. It was a delight to hear them belt out their songs so close. I typically think of the Meadowlark as being a ventriloquist, making this bird sometimes difficult to find. At Antelope Island, with the shorter distances in which they tolerated me, it was very obvious as to the perch the song was coming from. A definite sign of the arrival of Spring! 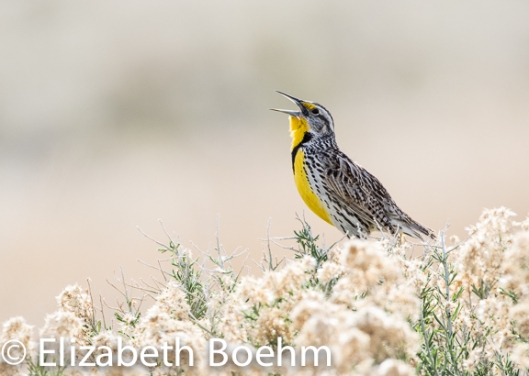