It was a great spring and early summer for photo subjects this year. I photographed two fox dens and then happened upon three coyote pups that were holed up in a road culvert awaiting the return of their parents. Having recently adopted a pup from the local rescue, it was fun to see the similarities in the canines. Play, sleep, and eat, not necessarily in that order, are the focal points of all of their lives.

I spent more time with the fox kits

being able to return on several occasions. They were shy at first but using a blind they came out of their dens to play and sleep. Always wary to the slightest noise it was imperative to be still and quiet. A slight movement in the blind would send them scurrying down the hole for an indefinite period of time. Patience was the key and a number of photographers would not have worked at either of these sites.

I had a great time watching the young as they would tussle with each other growling and biting. Stalking was another favorite as they moved between holes in the den. One would “hide” and then wait for a sibling to pass, pouncing at the last minute. Both dens had several dead rodents and old bones laying around for the kits to chew on and eat but as is typical of young canines, they became play toys. 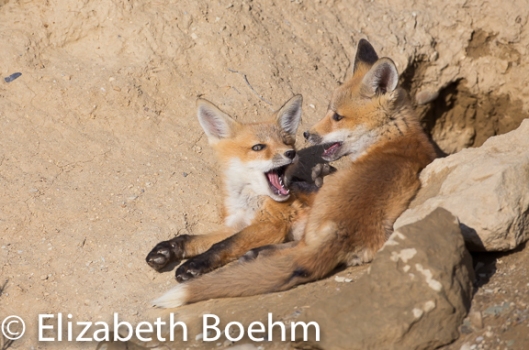 I watched one morning as a Black-billed Magpie warily approached the entrance to the den. The den had a cottontail rabbit and several mice carcasses at the entrance. The magpie happened upon a windfall and started flying off with the mice. I watched as it flew a short distance from the den, mouse in bill; it then broke the rodent up into smaller pieces, stashed part of it, and headed back to it’s nest sight to feed it’s young.  One of the kits caught on to this as the magpie dragged the rabbit carcass downhill away from the den opening. It had been filling it’s bill with meat and carrying it away. The young fox stalked the magpie, chasing it from it’s larder. The kit then grabbed the carcass and carried it back to the den opening having to pull in reverse to get it up the hill. A great show of animal behavior.

I found the coyote pups in Southwestern Montana while on a birding expedition. I was driving down a gravel road in the evening and noticed movement in the road several hundred yards ahead of me. I stopped and glassed: a coyote pup. Slowly I approached in the car as the pup stayed put. I realized it was hanging out in a road culvert with several siblings and I stayed in my vehicle at a coyote-tolerable distance. It was a great find!  I had not been able to find a coyote den with willing subjects. There were three young pups and I do not believe this was the actual den. They were old enough to hang out by themselves and stay put while the adults hunted. 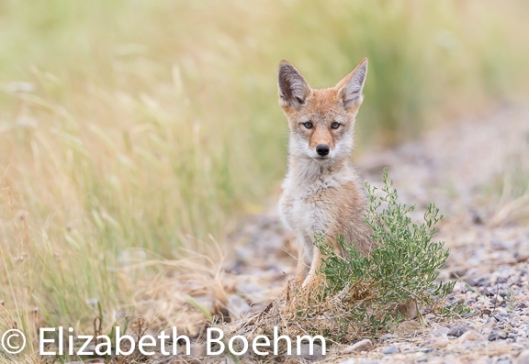 In typical puppy fashion; playing, sleeping, and eating were the order of the day. Anything was a toy including a rock and the bunches of grass along the roadside; these would be keep-away or tug-of-war toys. If one pup had an item in it’s mouth the others would try to take it away. They would tussle and run from each other. Big fun was running through the culvert to the other side of the road. Typically one of the three stayed on the road and jumped the pups coming out the other end of the culvert playing “King of the Road”.  I spent a morning and two evenings with these three youngsters and then suddenly during the last evening, they dove into the grasses, quietly called out by their parents. What fun to have watched these three play with abandon in front of my camera.